Warning: sizeof(): Parameter must be an array or an object that implements Countable in /home/customer/www/techmexo.com/public_html/wp-content/plugins/ad-injection/ad-injection.php on line 824

Warning: count(): Parameter must be an array or an object that implements Countable in /home/customer/www/techmexo.com/public_html/wp-content/plugins/ad-injection/ad-injection.php on line 831

Warning: sizeof(): Parameter must be an array or an object that implements Countable in /home/customer/www/techmexo.com/public_html/wp-content/plugins/ad-injection/ad-injection.php on line 824

Warning: count(): Parameter must be an array or an object that implements Countable in /home/customer/www/techmexo.com/public_html/wp-content/plugins/ad-injection/ad-injection.php on line 831

Bollywood and love stories go hand in hand. Any movie is felt incomplete without a love story. Romance, love, passion, and emotions rule Indian movies.
There are different love stories painted on the Silver screen by our directors and actors. You will all agree that Bollywood has given Romance and Love a new and perfect definition.
There was a time when Rose day and Valentine’s day were just common days, but today they have become as popular as Karwa Chauth, all Thanks to Bollywood love stories. Here is a list of Top unforgettable Love Stories ever produced by Bollywood.
We might have forgotten your favorite love story of Bollywood, then please Do Not hesitate to drop a message below the post.
Here’s what FilmyKeeday team has researched and found out to be the best Top 20 Bollywood love stories Movies ever made. If you haven’t seen these love stories then you have missed something.
Do not forget to leave your comments, our team is waiting for it.
“Spoiler Alert”

Back in 1949, love stories were like a taboo topic, inter caste marriages or going against parents wish to marry your love interest were seen as a Bad impact on society. Barsaat movie came as a real Hero, fighting with these evils of our society.
The movie depicts how Resham faces complications because of her love life, parents’ opposition, attempted forceful marriage to a fisherman, but how her true love fights and wins them all.
The movie stars- Nargis and Raj Kapoor

Inspired from a true story, A Mughal Era Prince who falls in love with a court Dancer, fights with the emperor for his love. A tale of doomed love of Prince Saleem and ill fated court dancer Anarkali.
The movie was made with a huge budget 1.5 Crores, It might seem nothing for a movie today, but back in 1960 making a movie worth 1.5 crores was a very big deal for anyone. The movie was made in black and white, colored version was released in 2004.
It was one of the Best Movies of 60s ERA.
The film stars: Madhubala and Dilip Kumar 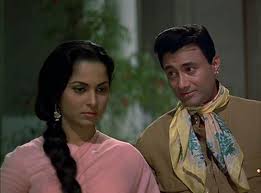 A Still from Guide

Based on the novel, The Guide by R K Narayan. A woman who is stuck in a bad marriage meets a guide on a trip with his husband who is an archaeologist.
Marco (an archaeologist) becomes busy in researching on caves and forgets about his wife Rosie (Waheeda Rehman). Rosie finds love in the Guide’s (Dev Anand) company. 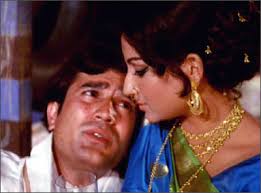 Based on a Bengali short story Nishi Padma by Bibhutibhushan Bandopadhyay. Are love stories only between a man and a woman.
Amar Prem has two love stories, a pious love between a prostitute with a heart of Gold and a lonely businessman (Anand), and the other love story is between the same prostitute and a young ill fated boy Nandu who is ill treated by his Step mother and finds solace in the company of the prostitute (Pushpa) who treats Nandu as her own son.
Movie stars : Sharmila Tagore, Rajesh Khanna and Vinod Mehra (Nandu) and Sarika (young Nandu)

The love story of a Courtesan (Tawaif) and a stranger whom she has never met, but has left her a message on the train.
From that day the courtesan waits for her stranger everytime the train passes from her window. Destiny unfolds it, they meet and get separated. But their love never dies.
Famous Dialogue of Pakeezah– “Tumhare paaon dekhe, bahut haseen hain. Inhe zameen par mat utaariyega, Maile ho jaayenge. Aapka ek humsafar”[I have seen your feet, they are beautiful. Please do not place them on the ground, They will become Dirty— A fellow traveler]
The movie stars : Meena Kumari and Raaj Kumar

A Love story of a famous singer Subir and is a common girl Uma. Uma’s singing brings her success and Subir’s career starts falling down.
Pride enters their married life and starts eating their love.
Uma and Subir get separated, this separation allows Subir to breathe the fresh air and realize what his Pride and jealousy did. The couple reunites and as all good story ends with, they too live happily ever after.
Movie stars – Jaya and Amitabh

A love story of a young poet Amit (Amitabh) and a young girl Pooja (Rakhee). Destiny unfolds and they are forced to marry different people.
Amit marries Anjali (Waheeda) and Pooja marries Vijay (Shashi Kapoor).  This movie is all about how these two different love stories meet again and the movie unfolds its secret path of Love.
Movie stars- Amitabh, Rakhee, Shashi Kapoor and Waheeda Rehman 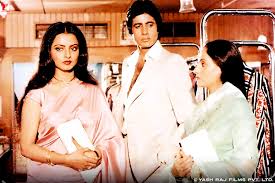 How circumstances play a role in Love stories, this movie shows it all. A sudden demise of a close friend forces Amitabh to marry his friend’s love, to save her from the humiliation of the world as she is pregnant, and forget his own Love Story.
Destiny entangles their love stories, and how a new story born with all fresh colors.
This movie has Amitabh, Jaya, and Rekha 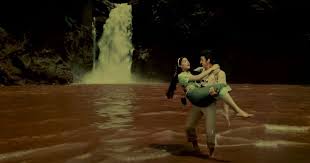 A love story between a Tamil boy (Vasu) and a north Indian Girl (Sapna). Two totally different backgrounds, different languages and different cultures, still love struck them. They do everything to be one.
The movie stars- Kamal Haasan and Rati Agnihotri

A love story of a Kidnapper (Jackie) and daughter of a Police Officer,  Radha (Meenakshi Seshadri). Jackie turns into a good man, leaves everything for Radha.
But their love story doesn’t get the approval of Radha’s parents. Jackie fights for his love, saves Radha and her family from Drug smugglers and Wins the love of his life and Radha’s family.
The movie stars- Jackie Shroff and Meenakshi Sheshadri 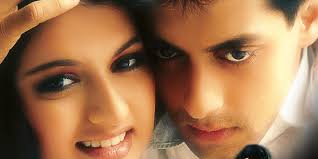 When childhood friends meet after years and find that the financial difference in the friends has made their friendship weaker.
Their children, Rich boy Prem (Salman) and the poor girl Suman (Bhagyashree) fall in love and fights for their love. They not only become One but also make their families one.
The movie stars- Salman Khan and Bhagyashree

A rich boy Raj, who is carefree meets Simran, a sensitive and emotional girl. The two meet on a month long Euro-trip. Their fun-filled trip ends and that separation makes them realize that they love each other.
The twist comes as for this trip Simran has promised her father that she will marry the boy her father chooses. She goes to Punjab to get married and Raj comes to get the love of his life back.
The film stars- Shahrukh Khan and Kajol

A love story across borders. A girl from Pakistan (Zaara) and an Indian Air Force Pilot (Veer) meets when Zaara comes to India to scatter the ashes of her family’s loyal servant and meets with an accident, Veer on a rescue mission meets Zaara. Lovestruck and soon time arrives when Zara has to leave for Pakistan.
Veer finds out that Zara loves her and wants to marry her, she is being forced into a marriage. Veer comes to rescue her but ends in Jail with a fake Identity of an Indian Spy. He stays silent for 22 years so Zaara can lead a happy life outside.
Outside the news of Veer’s death is announced by Zaara’s fiancée, who denies getting married to Zaara on the day of the wedding to humiliate her. Zaara goes to India, to take care of Veer’s parents and lead a life of Veer’s widow.
22 years of separation and silence just for their love. After 22 years a young Pakistani lawyer Saamiya helps Veer to get back his identity and reunites the couple.
Film Stars- Shahrukh Khan, Preity Zinta and Rani Mukherjee

College friends Janardhan and Heer become friends, At the time of Heer’s wedding, they realize that this friendship is more than what they thought. Jordan (Janardhan) becomes a famous singer and gets a chance to visit Prague where Heer has moved after marriage.
Jordan finds Heer has lost the charm she had. They spend time together and Heers lightens up. The movie unfolds and she finds out she has very less time and is about to die.
Film stars- Nargis Fakhri, Ranbir Kapoor
Which one is your Favorite!
See also  How to the know my phone has been contagion, How to the Remove It?