How To Apply Gujarat Anganwadi Recruitment 2022?

What Is The Last Date Of Anganwadi Bharti 2022?

Online Application Start Date : 14-03-2022
Online Application Last Date : 04-04-2022
In the recruitment of Anganwadi, Mini Anganwadi Assistant, the government has made many changes in the rules. Under this, the government has ended the interference of Panch-Sarpanches in the working of the Women and Child Development Department. Till now the final decision was taken at the Panch-Sarpanch level in the appointments of Anganwadi workers and they used to work on their own free will. But now applications will be invited for these posts by issuing advertisements.
Along with this, it has also been made necessary for the workers to be 10th pass. In fact, keeping in mind the complaints and departmental demands of the Anganwadi workers itself, the State Government has recently issued a new guideline for the appointment of Anganwadi workers. In this, a new qualification has been implemented for the applicant to be 10th pass. Along with this, they will also have to give a certificate of home-made toilet.
આંગણવાડી ભરતી જાહેરાત 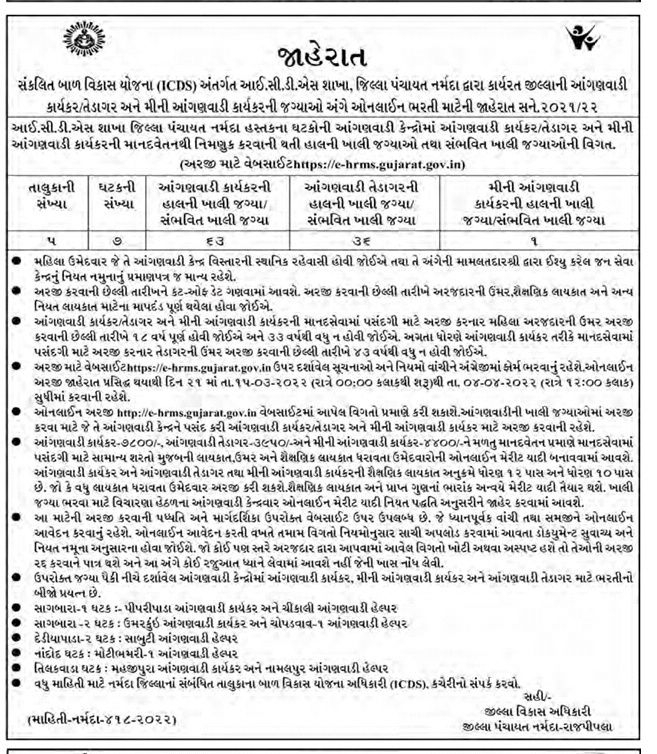 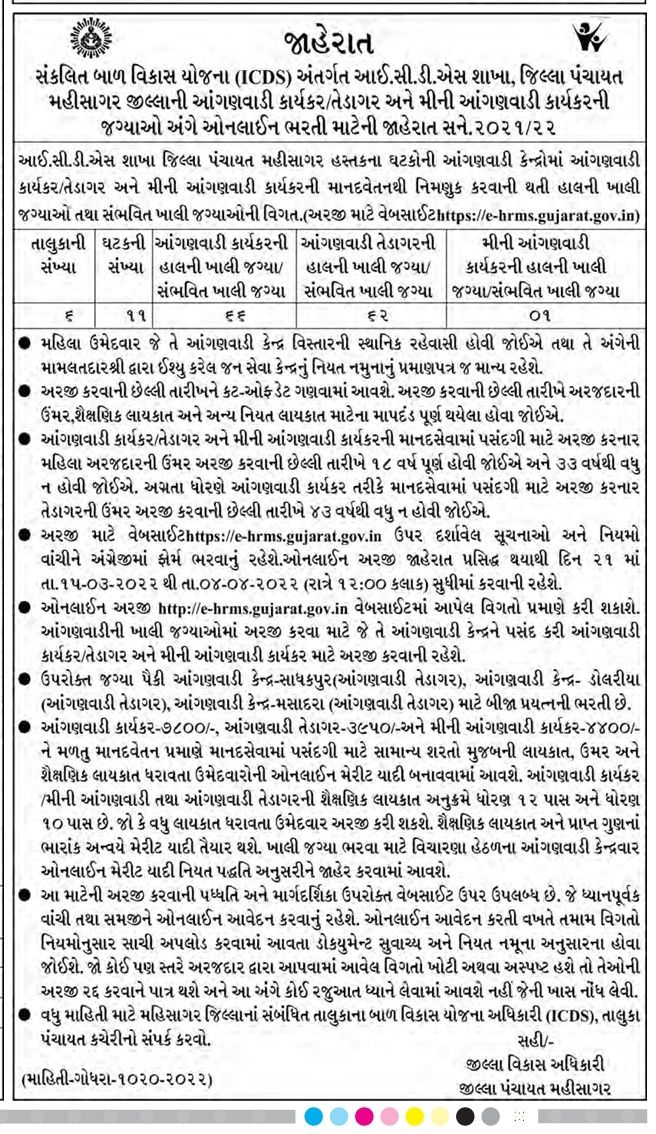 Government and officials believe that transparency is not maintained by many panchayats in the selection process of Anganwadi workers. 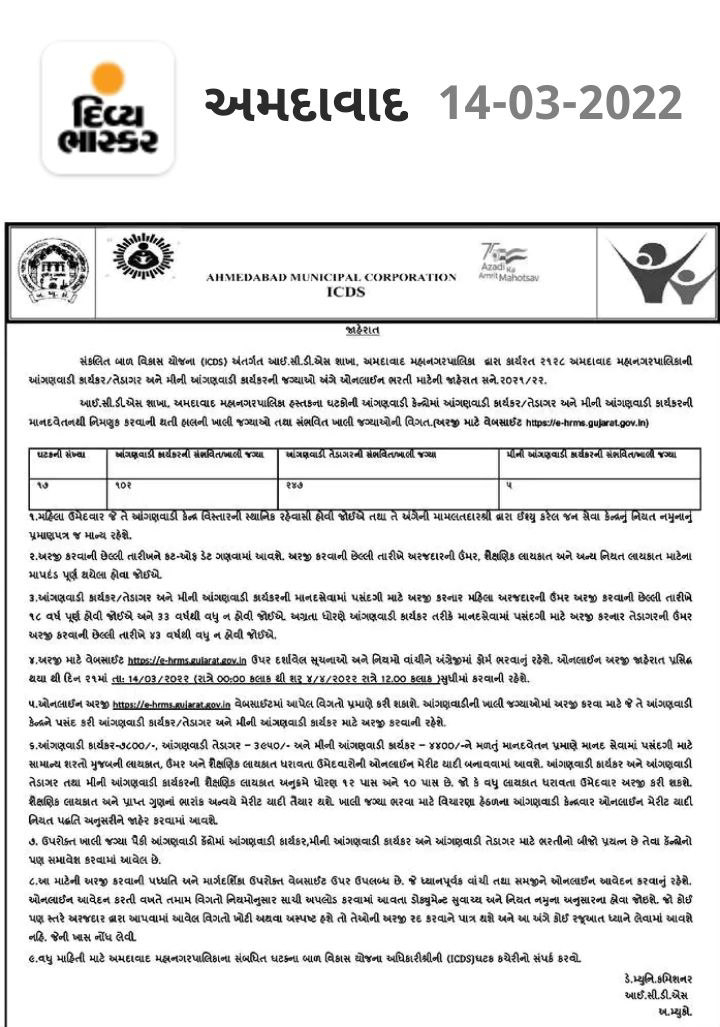 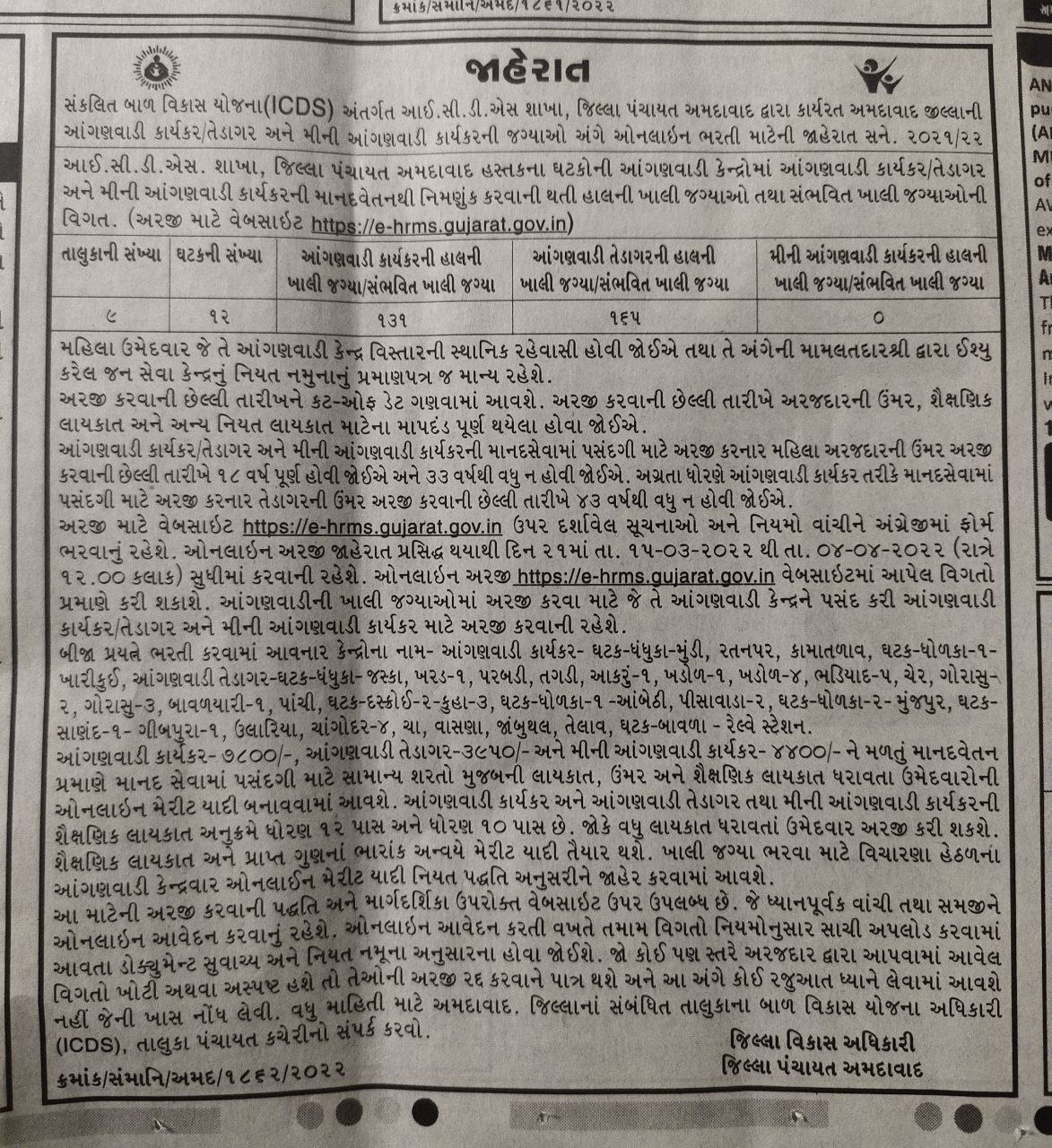 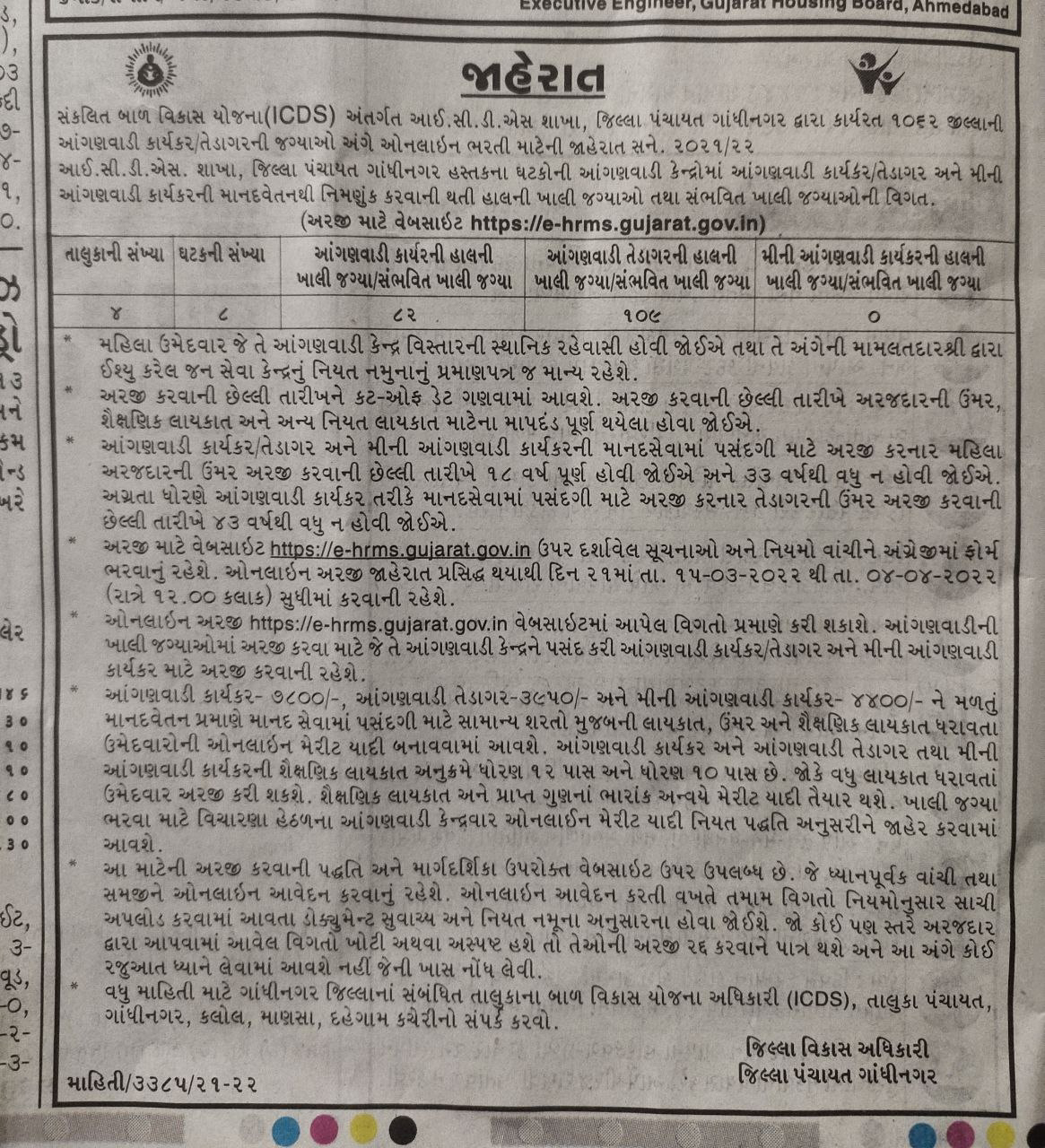 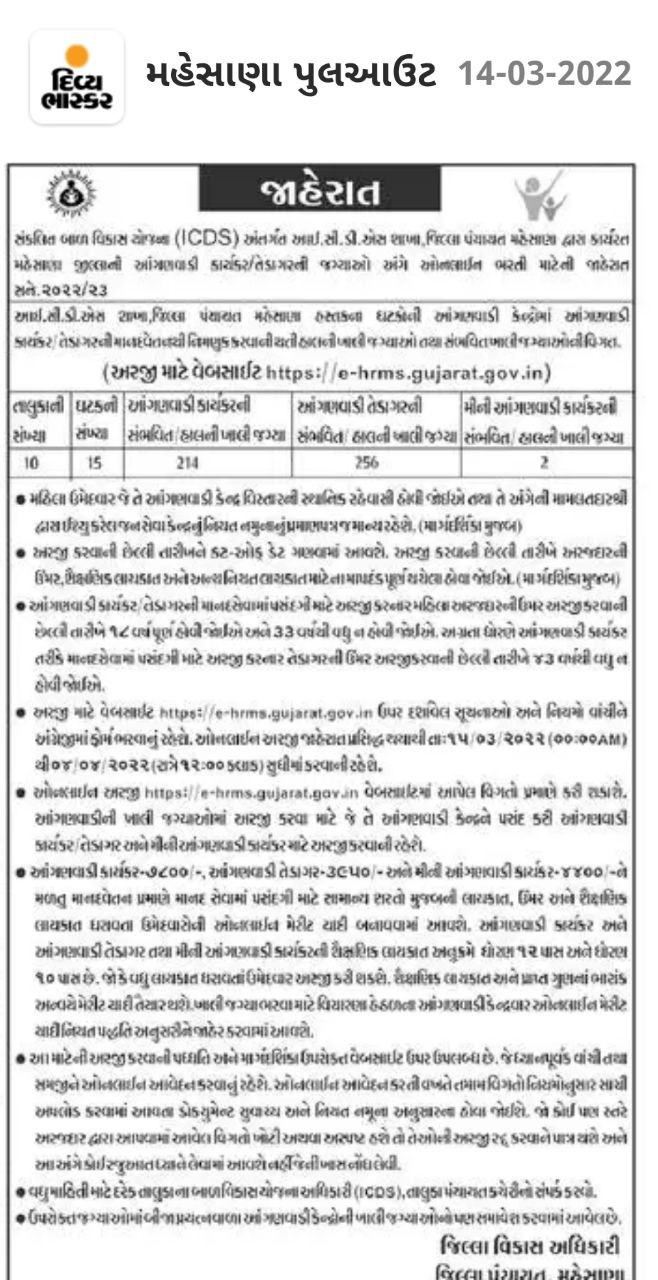 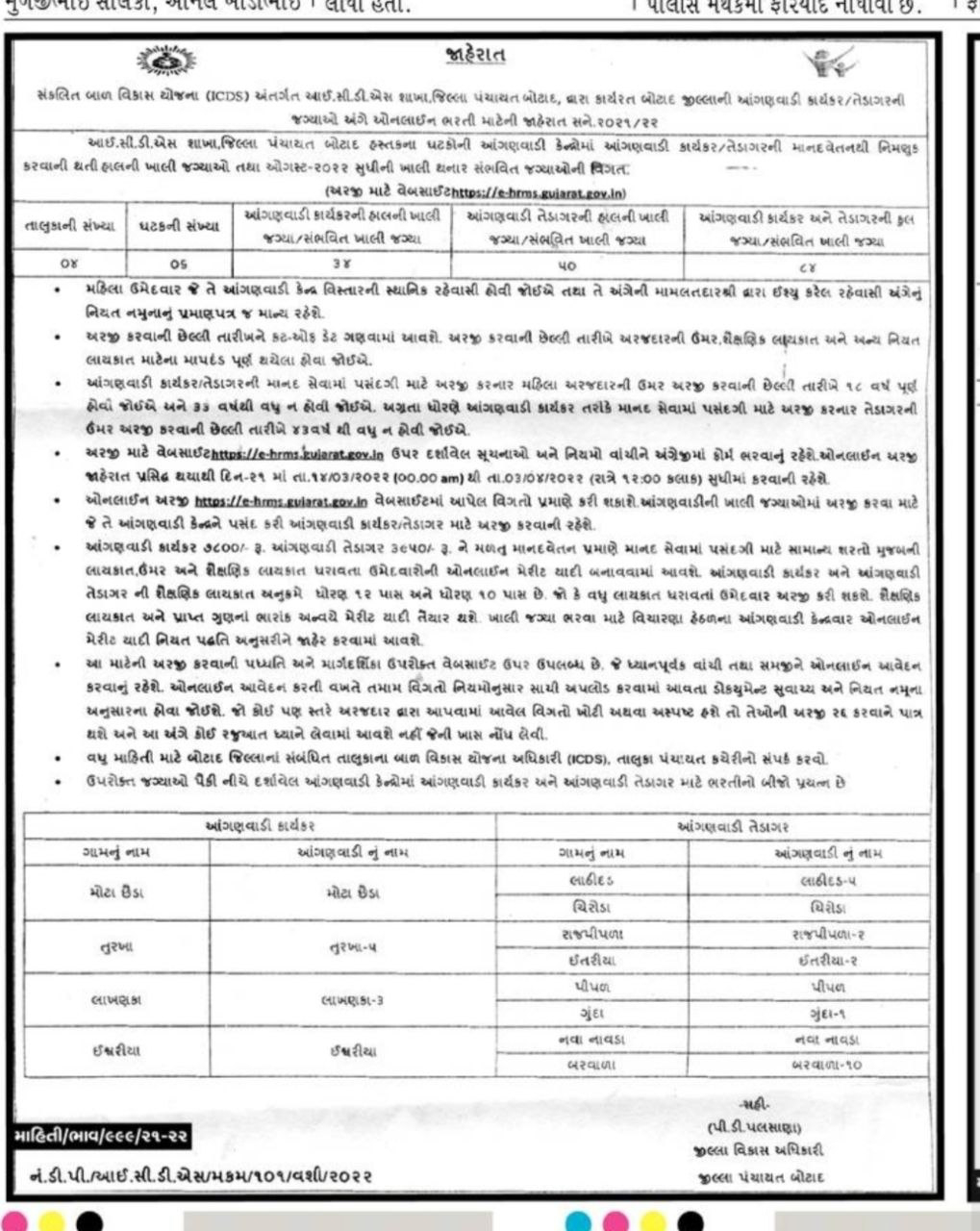 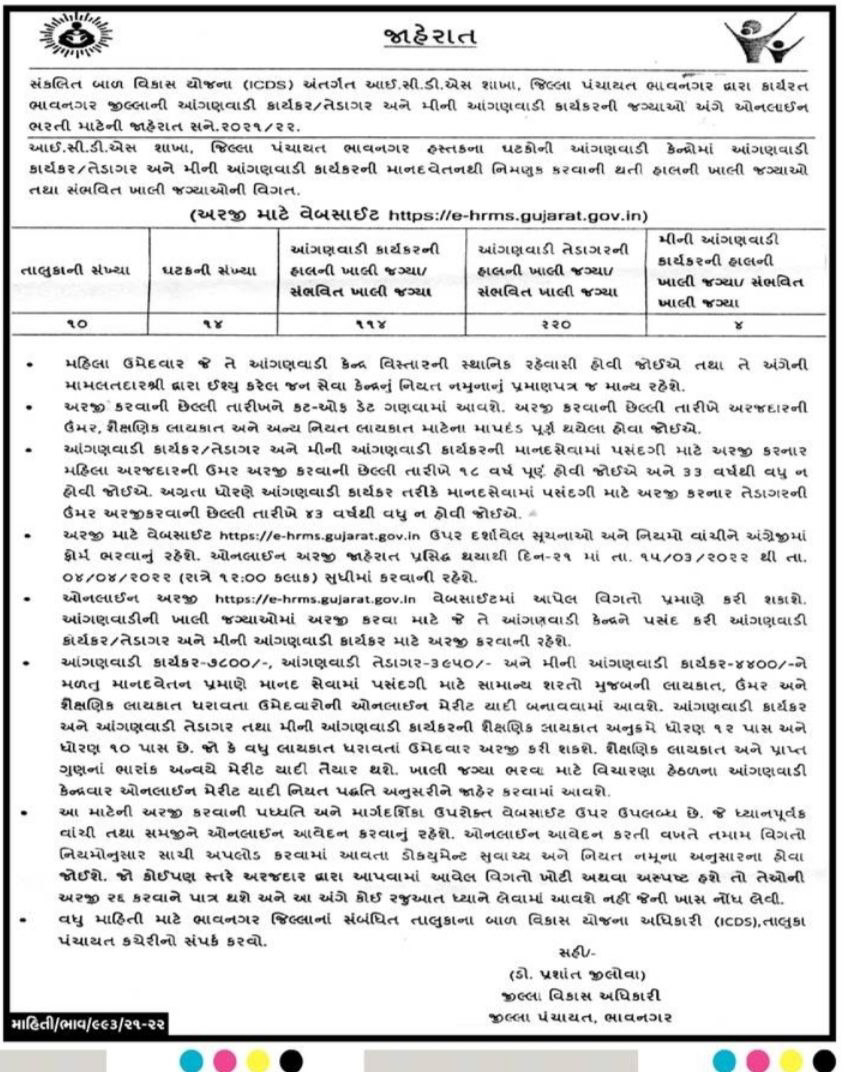 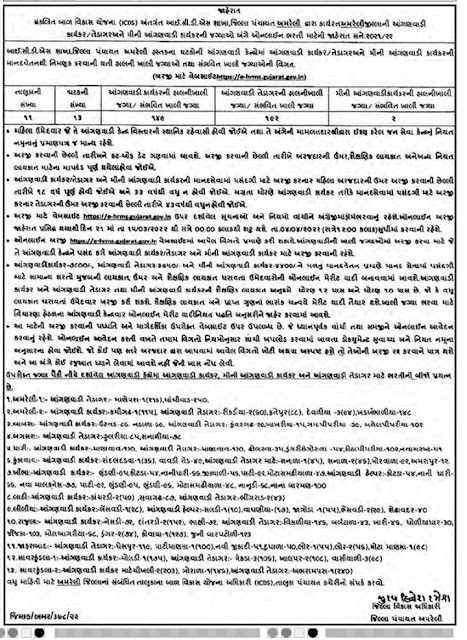 To put a stop to this, the department has come out with a new guideline. Even though the main role in the selection process has been given to the Department of Women and Child Development. But the final seal will be taken only in the Gram Sabha. There will be approval of the priority list. Selected personnel will have to join application duty within the prescribed limit.Earlier, a woman with eighth
*******************************************

Gujarat Angadvadi Bharti 2020 at https://e-hrms.gujarat.gov.in/ Advertisement for the post of AWW / AWH GUJARAT

(1) For the recruitment process of Anganwadi worker / Tedagar in the integrated child development service scheme under the Department of Women and Child Development, Resolution No. issued by the Department of Women and Child Development of the Government. Subject to ICD / 102018/15 / B (Part-2), Dt. From 9/11/2018 for selection of Anganwadi worker / Tedagar, EHRMS from worker / Tedagar service book, and standards regarding online recruitment process, honorary service, review, discipline rules. Will remain.
(2) Once the online application is confirmed by the applicant, there will be no scope for amendment.
(3) Any discrepancy between the information filled in the application form and the details of the uploaded documents will be deemed as cancellation of the applicant’s candidature. Uploaded documents must be readable.
(4) In cases where the applicant has passed the examination with more than one attempt, the applicant shall scan and upload the marksheet of each attempt. Candidates who pass with more than one attempt will have to count the marks of the passed subject / subjects of that marksheet. The total marks will be calculated after deducting the marks of the failed subject / subjects. Then count the marks of the re-passed subject / subjects. Thus, if the total marks of 8 subjects are 200, then only the marks of the subjects passed out of 200 out of different marksheets should be considered. E.g. If there are 5 marks obtained out of total marks in which there is failure with 5 marks in one subject then the marks obtained will be counted as 500 marks. Then if there are 50 marks in that subject then the marks obtained out of the total marks will be 60. 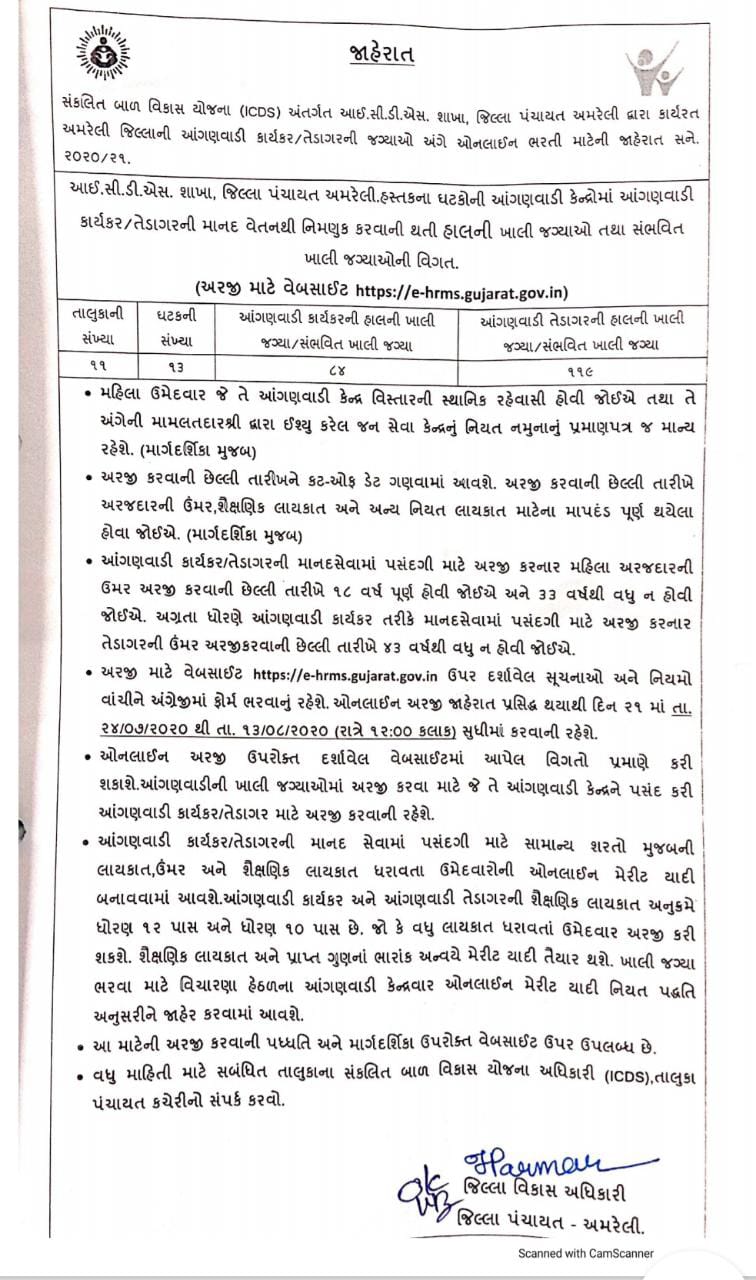 Where to apply for Gujarat Anganwadi Recruitment 2020?

What is the selection process for Ahmedabad Anganwadi Recruitment 2020?

Candidates will have to undergo Written Test and /or Interview Process.

What is the minimum age Limit for Gujarat Anganwadi Supervisor Vacancy 2020?

A candidate with Minimum 18 Years of age can apply for the vacancy.