Pay house rent to the state employees as per the Seventh Pay Commission on a central basis.

Seventh pay More than five lakh state employees have been deprived of housing benefits for the last four years.

Inflation is rising day by day today.  And as inflation continues to rise, people are having a hard time getting home. 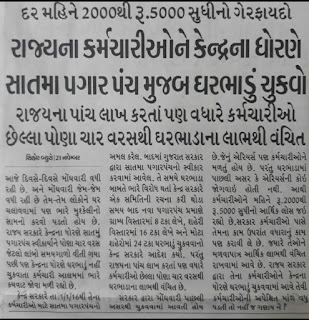 The Central Government has started the seventh pay commission for its employees from 1/1/16 Implemented.

Later, the 7th pay commission was accepted by the Gujarat government. At that time, due to strong opposition to the rent, the central government formed a committee Did.

But more than five lakh state employees have been deprived of housing benefits for the last four years.

If inflation is paid by the government with retrospective effect Whose arrears are also available to the employees.

But there is no provision for back effect or arrears in rent.  As a result, the employees are losing Rs 2,000 to Rs 5,000 per month.  Government employees have to do extra work in addition to their work.

When they are deprived of the economic benefits they deserve.  Isn’t the expected demand of the employees to be paid by the state government to its employees on a central basis excessive?