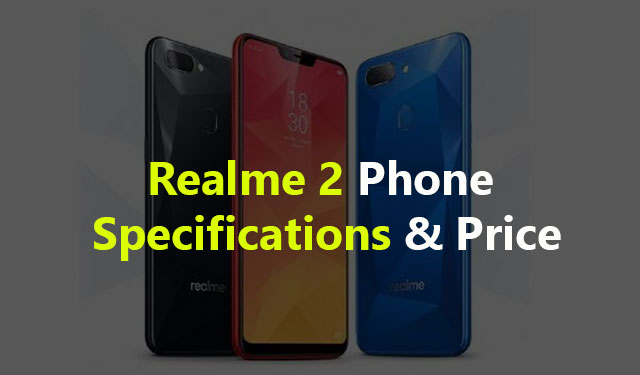 Realme 2 Phone Specifications & Price
RealMe 2 Honest Review:
Hello friends, there are some smartphones that are sold only on the name and there are some things that have a Best Value Phone according to the specifications and price, Realme 2 is going to be one such smartphone. So far the realme 2 specification or price leak has arrived, accordingly,
Now, how much truth is there in this, we will know only after seeing Realme 2 Phone Specification and Price, in the same way, this phone is being launched in India on August 28 and its first cell will be seen on Flipkart.
Even before this company has come up with a Smartphone Realme 1, which is worth the money phone, according to our design, feature and price, we can have an idea that the upcoming Realme 2 Phone will also be the best, Let us first know.
Realme 2 Phone Specifications:
Realme 2 Smartphone also has a Notch Screen phone, which is the most trending smartphone feature of this time. With this, we will be able to see one of the most unique features in the Realme 2 smartphone feature, which has not yet been done by a large smartphone brand. In this phone we will get to see the most powerful battery. This battery is so powerful that Xiaomi Smartphones did not meet us to see such batteries.
Display: In the phone, we will get a full HD display of 6.2 Inch, which will be with 2280 * 1080 pixel resolution and 19: 9 aspect ratio. Which is the best display size and quality for video streaming and gaming.
Processor: Realme 2 smartphone, we will see MediaTek Helio P60 Series processor replacing Snapdragon, which is a collision of the Snapdragon 600 series processor.
Memory: With just a standard 3GB of RAM, 64 GB internal storage is available with 32 GB internal storage and 4 GB of RAM and so on, we will find something similar in realme 2 phone specification.
Camera: Realme 1, we had only seen single back camera which left this phone in the market, but this time Oppo is not going to make any such mistake. In this phone we will get to see the Dual rear camera. Which will be of 13 + 2MP and together we will get an 8MP camera.
Battery: Realme 2 is the most powerful feature of the battery phone and this is why this phone can make its own place in the market as there was no such Smartphone launch, which has a powerful battery
Other Features: In the phone, we will be able to see Fingerprint sensor and with the help of Smart Lock system, we can also use Face Lock. With this all the basic sensor required in the phone will be able to see us.
Realme 2 Design:
We saw all Realme 2 specifications, we did not see any very unique features in it, as of nowadays we are seeing the same features seen in all the Smartphones, when this Smartphone launches and will reach the hands of users. So we will get information about Realme 2 phone review in hindi. But just know about its design,
The Phone’s Back Side is exactly like realme 1 smartphone but in it we will get a little change view. As it gets us to see the Dual rear camera which is mounted like Xiaomi Mi A1.
Realme 2’s design from Front Side is like the phone with all other notch screen, 6.2 inch full HD screen, at which we get to see a little nine which has a front camera mount and with a mic to listen to the phone call has given.
Realme 2 Price In India:
When Realme launched its first phone in India last time, it was making a lot of discussion for its price and all experts were telling it a best product, given its specification and price. Likewise this time Realme 2 is going to be getting much talk about its features and price.
What will happen in Realme 2 Price india? The correct information about this will be known only after the phone launches. But if you talk about its estimated price, it is believed that this will be an under 10000 Smartphone, which will cost around Rs 9,990 and it can be purchased from Flipkart 28 august.
Realme 2 Specification Pros & Cons:
Any phone does not meet our requirements, some of their features are considered best, so there are some features that are not right for us. In the same realme 2 smartphone, we also see pros and cons.
See also  Great offer for 34 million SBI Yono users, up to 50% discount on shopping
All of us should understand the realme 2 Phone Specifications & Price that this is a Smartphone built with low price trend features. We do not have a phone with a Notch screen right now because the phone with a mostly notch screen is worth more than 15 thousand and if you are talking about Realme 2 Phone price India, you will get it for 10 thousand rupees. I think this is going to be an average budget phone. What do you think you share in Comment