The government is making an important decision regarding the firing of firecrackers in Diwali, know what precautions have to be taken

Regarding the order of the Hon’ble Supreme Court regarding ban on firing of firecrackers in public during festivals and the ban on import of fireworks from abroad. 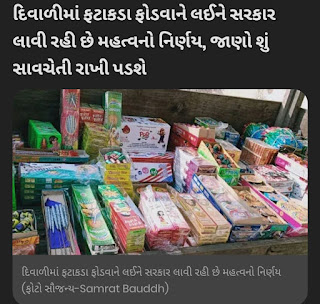 Considered the king of festivals, Diwali is considered to be a faint festival without new clothes, house cleaning, painting, rangoli, sweets and fireworks.

Even the poorest of the poor will give such happiness to their family in the supper days of Diwali.  Firecrackers are enjoyed by the young and the old, so there is no possibility of a ban on fireworks, even though Diwali is approaching during the Koro epidemic, although there may be a ban on lighting fireworks on public roads or in public places.

Fireworks are banned after 10 pm as per Supreme Court guidelines to curb air pollution, but to curb the spread of corona infection, the authorities will impose a mild ban on fireworks as per Covid-19 guidelines.

There is talk of banning public roads and public places while allowing fireworks on Diwali in the same way that the state government gave some concessions to devotees during Navratri. 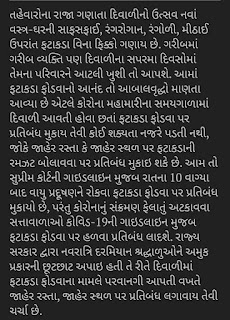 Authorities in the city will also follow the state government’s guidelines and will not stop Ahmedabadis from setting off firecrackers.

See also  From November 1, from the delivery of LPG cylinders, 7 rules including SBI interest rate will be changed,

Authorities are likely to appeal to people to observe Diwali with restraint as the smoke from the fireworks affects their lungs. On Diwali, Udip lit the lamp and went to at least the homes of relatives and friends to wish them a Happy New Year.

The system will place special emphasis.  Green will also appeal to people to burst fireworks. 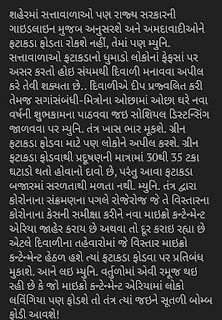 Green fireworks are claimed to reduce the amount of pollution by 30 to 35 percent, but such fireworks are not easily available in the market.  Mun.  Following the corona transition by the system, new micro-containment areas are declared or are being removed on a daily basis by reviewing the cases of corona in the area, which means that firecrackers will be banned in the area under micro-containment during the Diwali festival.  Take this to Muni.

There is a joke in the circles that if people in the micro-containment area also explode lavingia, then the system will go there and detonate twine bombs!

Circular dated 09/11/2018 of the department: V.2 / ESA / 12/2016 / GOI-1 19 (copy included) issued necessary instructions regarding fireworks during Diwali and other festivals as well as Christmas and New Year festivals.  Is.

According to the relevant District Magistrate / Commissioner of Police, the countries which are prohibited under section 13 of the CRPC are issued.  In the meantime, action is required.

Pursuant to which the District Magistrate / Commissioner of Police has immediately issued the necessary restraining orders under section 13 of the CRPC.

Request to be sent to The letter of the Directorate of Revenue Intelligence, Government of India dated 19/10/2050 regarding taking action against illegal seizure, storage and sale of firecrackers No. 50/13/2014 – CI (Pt.  A copy of 3 / 4B07 is attached herewith, requesting immediate action in this regard.